Iran has announced it will breach on 27 June the limit on its stockpile of enriched uranium that was set under a 2015 nuclear deal with world powers.
Its atomic energy agency said Iran had quadrupled its production of the material, which is used to make reactor fuel and potentially nuclear weapons.
But it added there was "still time" for European countries to act by protecting Iran from reinstated US sanctions.
The UK, France and Germany have warned Iran not to violate the deal.
They have previously said they will have no choice but to reimpose their own sanctions, which were lifted in return for limits on the Iranian nuclear programme.
This latest development comes at a time of high tension in the Middle East, with the US accusing Iran of being behind suspected attacks that left two oil tankers ablaze in the Gulf of Oman on Thursday. Iran has denied any involvement. 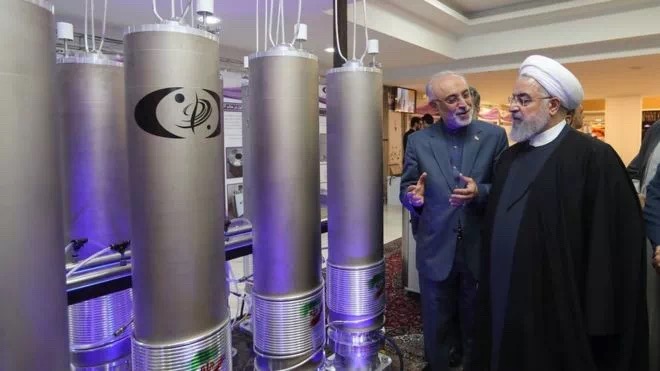 What has been the reaction?
A spokesman for UK Prime Minister Theresa May said her government had been "clear about our concern at Iranian plans to reduce compliance" with the deal.
"Should Iran cease meeting its nuclear commitments, we would then look at all options available to us," the spokesman added.
The Germany foreign ministry urged Iran to abide by the deal.
Israeli Prime Minister Benjamin Netanyahu, who was a staunch opponent of the nuclear deal, called for international sanctions to be reimposed immediately "should Iran deliver on its current threats".
"In any event, Israel will not allow Iran to get nuclear weaponry," he warned.