Boris Johnson has admitted he would need EU co-operation to avoid a hard Irish border or crippling tariffs on trade in the event of a no-deal Brexit.
In an exclusive interview with the BBC, the favourite to be the next PM said: "It's not just up to us."
But he said he did "not believe for a moment" the UK would leave without a deal, although he was willing to do so.
Asked about a row he'd had with his partner, he said it was "simply unfair" to involve "loved ones" in the debate.
Reports of the argument on Friday with his girlfriend, Carrie Symonds, dominated headlines over the weekend after the police were called to their address in London.
The interview comes after Sky News said it would have to cancel a head-to-head debate on Tuesday between the two leadership contenders as Mr Johnson had "so far declined" to take part.
Work and Pensions Secretary Amber Rudd told Radio 4's Today programme she found Mr Johnson's decision to ignore live TV debates "very odd" and urged him "to reconsider".
Following days of criticism that he has been avoiding media scrutiny, Mr Johnson has given a number of other interviews, including with LBC and Talk Radio.
On LBC, he was repeatedly challenged on his personal life and a photograph which showed him and his partner. Asked whether his campaign was behind the release of the picture, Mr Johnson refused to answer.
He told Talk Radio's political editor Ross Kempsell he would "not rest" until the UK had left the EU, insisting Brexit would happen on 31 October "come what may... do or die".


Meanwhile, the other candidate, Jeremy Hunt has promised to boost defence spending by £15bn over the next five years if he becomes prime minister. 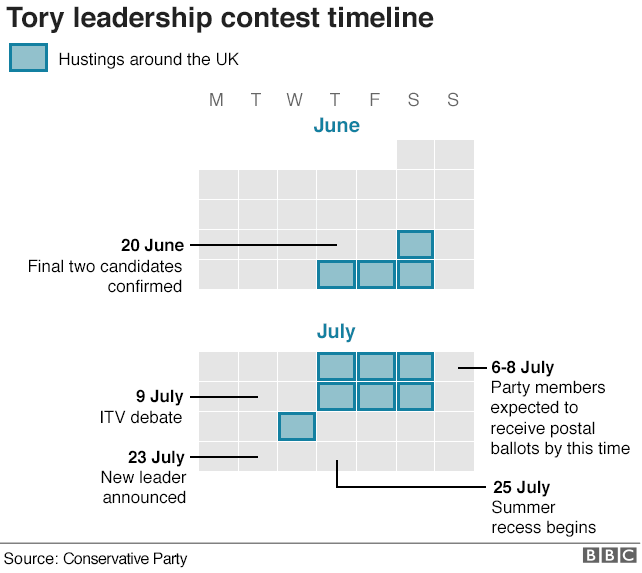