Measles can be deadly VS Low trust in vaccination

Public mistrust of vaccines means the world is taking a step backwards in the fight against deadly yet preventable infectious diseases, warn experts.

The biggest global study into attitudes on immunisation suggests confidence is low in some regions.

The Wellcome Trust analysis includes responses from more than 140,000 people in over 140 countries.

The World Health Organization lists vaccine hesitancy as one of the top 10 threats to global health.

The global survey reveals the number of people who say they have little confidence or trust in vaccination.

When asked if vaccines were safe:

14% neither agreed nor disagreed

When asked if they believed vaccines worked:

84% agree either strongly or somewhat

5% either strongly or somewhat disagree

12% neither agreed nor disagreed

Countries that were close to eliminating measles have been seeing large outbreaks.

A decision not to vaccinate, for whatever reason, poses a risk to others as well as the individual from being infected themselves.

If enough people are vaccinated, it stops the disease from spreading through a population - something experts call "herd immunity".

Imran Khan, from the Wellcome Trust, said: "We are really concerned at the moment because for measles, anything less that 95% coverage can lead to outbreaks and that is what we are seeing." 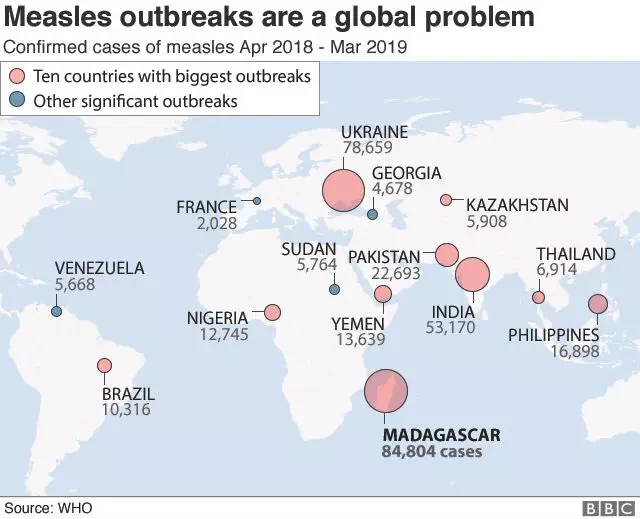 In the survey, people with more trust in scientists, doctors and nurses tended to be more likely to agree that vaccines were safe. Conversely, those who had sought information

about science, medicine or health recently appeared to be less likely to agree.

In the UK, there has been misinformation circulating about the MMR jab and autism.

Dr Lindstrand said: "One of the most important interventions to counteract doubts and worries about vaccines is to have health workers really well trained and able and ready to

recommend vaccinations based on scientific truth and to be able to respond correctly to questions and concerns that parents have and communities have."