Texts released by Democrats in Congress reveal how US officials worked to push the Ukrainian president intoopening a public inquiry into President Trump's leading opponent, Joe Biden.
The messages come as Mr Trump faces a formal impeachment inquiry about it.


The exchanges show a senior diplomat saying it would be "crazy" to withhold military aid to Ukraine for Mr Trump's political gain in the 2020 election.


But Mr Trump denies any wrongdoing and, on Thursday, publicly called on Ukraine and China to investigate Mr Biden and his son Hunter over their political and business dealings, even though he has not offered specific evidence.

He accuses his opponents of a "witch hunt".
Impeachment in the House of Representatives would remove Mr Trump from office - but only if endorsed bythe Republican-controlled Senate.


What do the texts say?

The impeachment inquiry stems from a 25 July call in which Mr Trump asked President Volodymyr Zelensky to investigate his rival.

The wide-ranging text message discussions are connected to allegations by the Democrats that Mr Trump dangled military aid as a way to press Ukraine to dig dirt on Mr Biden.

Sent between July and September, they involve high-ranking officials:
Kurt Volker, Mr Trump's Ukraine envoy who resigned a week ago Gordon Sondland, the US ambassador to

the European Union, and a significant donor to Mr Trump Bill Taylor, a top US diplomat at the US embassy in Ukraine

On 19 July, the three diplomats discussed arranging a phone call between Mr Zelensky and Mr Trump.

Mr Volker told the other two he had had breakfast with Mr Trump's lawyer, Rudy Giuliani that morning - andidentified the main purpose of the upcoming phone call.

What were the diplomat's concerns?


In the call, Mr Trump asked Mr Zelensky to investigate Joe Biden "as a favour".

But text messages show US officials discussed what the Ukrainian president should say in a statement afterwards.

By 13 August, Kurt Volker advised that Mr Zelensky's statement should address interference in US politics, "especially with the alleged involvement of some Ukrainian politicians" - and Burisma, the company Joe Biden's son was involved in.

There has been no evidence of wrongdoing by Hunter Biden.


Then, on 29 August, the tone of discussions changed. Mr Zelenksy's aide Andriy Yermak sent a curt message to Mr Volker, including a link to a Politico story headlined Trump holds up Ukraine military aid meant to confront Russia.

Mr Taylor, the senior diplomat in Ukraine, seemed to voice his concerns about the motives for the delay.
"I think it's crazy to withhold security assistance for help with a political campaign," he said.


That suggestion, however, was firmly pushed back by Ambassador Gordon Sondland, who said Mr Taylor was misunderstanding the president's intentions: 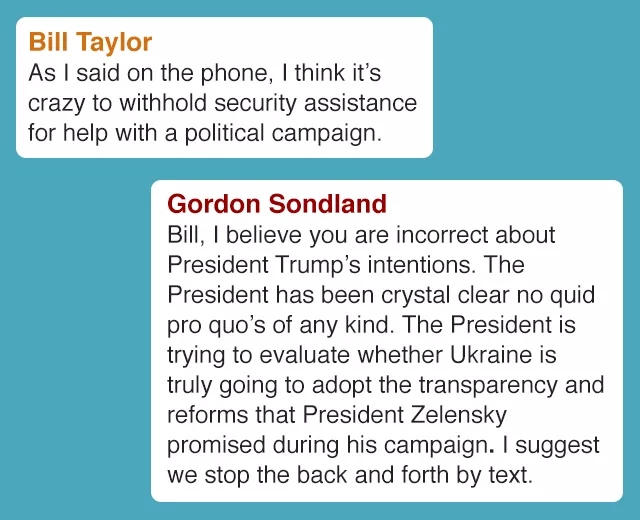 What are Democrats and Republicans saying?

In a letter alongside the release of the texts, top-ranking Democrats criticised Mr Trump's "now open

defiance of our core values as American citizens."

"The President and his aides are engaging in a campaign of misinformation and misdirection in an attempt to normalise the act of soliciting foreign powers to interfere in our elections," it said.

"This is not normal or acceptable. It is unethical, unpatriotic, and wrong."
But Republican Jim Jordan said Mr Volker's testimony on Thursday had "undercut the salacious narrative thatRepresentative Adam Schiff is using to sell his impeachment ambitions".


The House Oversight Committee - of which Mr Jordan is the ranking Republican member - tweeted that "thisinformation [contained in the text messages] cannot possibly be understood without Volker's explanations from yesterday's testimony".

He has called for the entire transcript of the testimony to be released.

President Volodymyr Zelensky. Text messages between members of the US team involved in Ukrainian diplomacy, however, suggest a different story.

It was very clear to them what the Mr Trump wanted: a publicly announced Ukrainian investigation of political rival Joe Biden and the 2016 election hacking.

It also was very clear what they had to offer the Ukrainians: not only US military aid, which had been put on hold by the White House, but also a meeting between the two presidents in Washington that would have be extremely valuable in bolstering the legitimacy of the newly elected Ukrainian leader.

Drawing a straight line between the offer and the ask doesn't take much imagination.


It may not be long before the White House falls back to its final line of defence - that threatening and cajoling Ukraine to investigate Mr Biden was justified by the egregiousness of Mr Biden's alleged corruption.

With Mr Trump backed into a corner, it's a recipe for all-out political warfare.